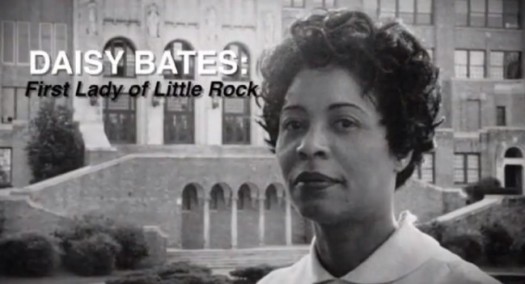 Daisy Lee Gatson was born in Huttig, Arkansas on November 11, 1914. Shortly, after giving birth to Daisy’s mother was sexually assaulted & murdered by three white men. He father left shortly after that and Daisy was raised by a family friend.

On her adoptive father’s death bed he gave her advice on her pining anger for the lack of justice for her mother’s death:

At age 25, Daisy met Lucious Christopher Bates. He was an insurance salesman and experienced journalist. The eventually got moved to Little Rock in 1941. Shortly after married on March 4, 1942.

Daisy and L.C (Lucious) decided to become owners of a newspaper. They called their newspaper Arkansas State Press. It was a weekly paper that was distributed statewide. On May 9, 1941 the first issue was published. The paper was said to a be voice of the Civil Rights movement, long before it the Civil Rights Movement was nationally recognized.

Daisy joined a local NAACP in Little Rock, she was following in the footsteps of her father. She became President of the Arkansas Conference of NAACP branches. She was also the public face integration movement in Little Rock. Daisy was the one who would be with the Little Rock 9 students that were to attend Central High.

Daisy set in place plans to protect these student to get to and from school safely. She made her roll clear and joined many school organizations to make this transition as easy as possible. Also, kept in touch with the parents so they know everything that was going on.

Bates played a significant role advocating and guiding the Little Rock Nine. Her house was the drop off and pick up point for them. Later, her house would become a National Historical Landmark.

Due to her focus on the Little Rock Crisis Daisy and her husband loss the revenue for their paper which caused them to closed it down in 1959. Her husband passed in 1980. Daisy then decided to revamp the Arkansas State Press in 1984.

The state of Little Rock paid Daisy the highest tribute they could. They open up a elementary school in her name and on 3rd Monday in February Daisy Gatson Bates is an official holiday.